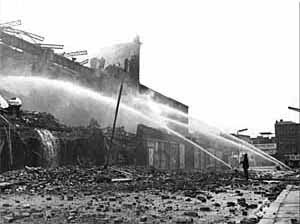 
At 06.20 on the morning of Saturday 5th December 1964 the London Fire Brigade received the first of many calls to a fire at Bishopsgate Goods Depot, in Shoreditch High Street, London E1.