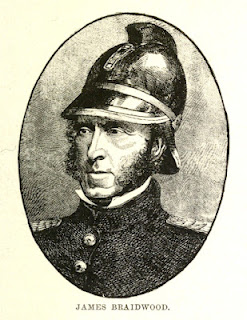 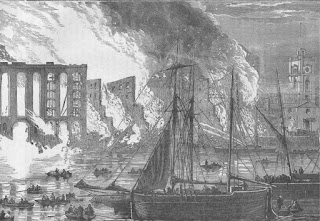 On July 9, 1861, the steamship Arago arrived in New York from England with a newspaper correspondent’s report on a conflagration at Tooley Street, London.

The blaze, which broke out June 22 and burned for days, claimed the life of James Braidwood, superintendent of the London Fire Engine Establishment.

Braidwood, admired far and wide for his skill and bravery, pioneered the modern fire service.

In his 28 years at the helm in London, Braidwood accomplished more in the field of firefighting and fire prevention than anyone before him - even kings and parliament.

Braidwood was a Scot.


He was born in Edinburgh in 1800, attended the Royal High School, joined his father's building firm as an apprentice, became a surveyor and gained "exceptional knowledge of the behavior of building materials and housing conditions in the Old Town of Edinburgh," according to Wikipedia.


Following the Great Fire of Edinburgh in 1824, Braidwood pressed for the formation of a trained fire service to replace the usual collection of mobs and bucket brigades.


In the early 19th C., people were leaving Edinburgh’s Old Town for the more comfortable surroundings of the New Town. [Gazetteer of Scotland]


The city had very limited fire services and, following a series of deadly fires, which culminated in the Great Fire of Edinburgh of 1824, Braidwood persuaded the authorities and insurance company brigades to work together.


Braidwood recruited to the service expert tradesmen - slaters, carpenters, masons and plumbers - who could apply their various fields of expertise to firefighting. [Wikipedia]


He also recruited experienced mariners for an occupation that required heavy manual work in hauling engines and trundling wheeled escape ladders up and down Edinburgh's steep streets, as well as nimble footwork when negotiating rooftops and moving through partially destroyed buildings.

His 1830 text "On the Construction of Fire Engines and Apparatus" preached such things as getting a hose line close to the seat of the fire to extinguish it rather than pouring on water from a distance.

The book was considered ground-breaking and led to Braidwood's appointment as superintendent of the London Fire Engine Establishment in 1833.

His new brigade was funded by London’s insurance companies and staffed by 80 full-time fire-fighters at 13 stations who wore a functional grey uniform -- designed by Braidwood -- with knee-high boots and black leather helmets.


His crews were nicknamed ``Jimmy Braiders."

Men who had served in the Royal Navy received preference in hiring for their discipline, strength and training. 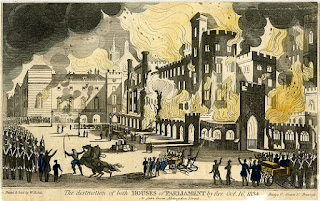 The new brigade faced a major challenge when the Houses of Parliament burned on Oct. 16, 1834.

The blaze started in a basement furnace and spread rapidly.

Seeing the fire was well-advanced, Braidwood directed his force to concentrate on saving Westminster Hall and checking the spread of the flame to other structures.

In that, they succeeded.

Even so, the fire was considered a national tragedy.

In the aftermath of blaze, Braidwood pursued an aggressive effort to reduce the numbers through safer building construction.

In a letter to the Times of London newspaper, [fire.org.uk] Braidwood wrote:

The causes of the fire proceeding so rapidly in the work of destruction I believe to be as follows:

1 The total want of party walls.

2 The passages which intersected the building in every direction and acted as funnels to convey the fire.

3 The repeated alterations in the buildings which had been made with more regard to expedient then to security.

4 The immense quantity of timber used in the exterior.

5 The great depth and extent of the buildings.

6 A smart breeze of wind.

7 An indifferent supply of water which, though amply sufficient for any ordinary occasion, was inadequate for such an immense conflagration.

8 My own and the firemen's total ignorance of the localities of the place. In fires in private dwellings, warehouses, or manufactories, some idea may generally be formed on the division of the inside of the premises from observing the appearances of the outside, but in the present case that rule was useless. 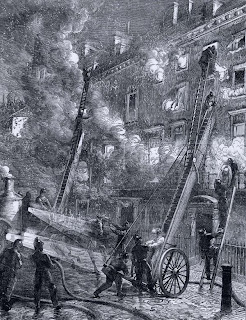 The primary role of the London Fire Engine Establishment was the protection and salvage of property as it was funded by the insurance industry.

Life safety was of secondary concern.

In 1836, the Society for the Protection of Life from Fire was organized separate of Braidwood's brigade to place wheeled ladders throughout London.

The wooden "escapes" could reach as high as 60 feet.

The cumbersome but effective apparatus were operated by "conductors" who were employed by the society and underwent months of training.

(The use of wooden escape ladders continued into the 1970s and 1980s on motorized vehicles).

The firemen of London Fire Engine Establishment and the Society for the Protection of Life from Fire worked closely throughout the Braidwood era.

In 1854, for example, they conducted a number of rescues in a blaze at Raggett's hotel in central London while Braidwood directed the fire-fighting. 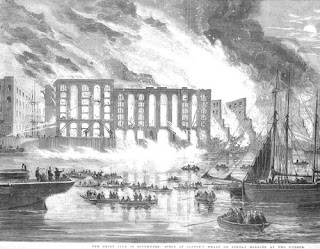 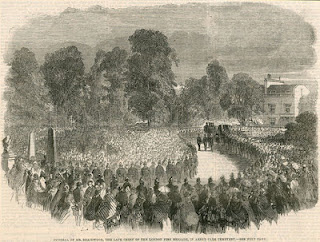 According to a sketch of Braidwood:


Although discovered in broad daylight, and before the flames had made any considerable headway, the want of a ready supply of water, and the fact that the iron doors in the division walls between the several warehouses had been left open, taken in connexion with the extremely combustible nature of the materials, soon rendered hopeless all chance of saving the buildings and property.
(Braidwood) appears to have at once foreseen that the fire would be one of no ordinary magnitude, and that the utmost that could be done would be to prevent its extending widely over adjoining property.
The floating fire-engines had been got to bear upon the flames, and the men in charge of the branch pipes were, after two hours' work, already suffering greatly from the intense heat, when their chief went to them to give them a word of encouragement.
Several minor explosions, as of casks of tallow or of oil, had been heard, but as it was understood that the saltpetre stored at the wharf was in buildings not yet alight, no alarm was then felt as to the walls falling in
At the moment, however, while Mr. Braidwood was discharging this his last act of kindness to his men, a loud report was heard, and the lofty wall behind him toppled and fell, burying him in the ruins.
It was a tremendous loss, with Queen Victoria sending her condolences.

Braidwood's funeral procession stretched for a mile and a half through London with thousands in attendance.

On the 150th anniversary of the Tooley Street Fire, the London Fire Brigade published the following account on its website:

By 6 p.m., 14 fire engines, including a steam fire engine and the floating engine, were all at the fire. The fire spread quickly throughout the workhouses as the iron fire doors, that separated many of the storage rooms, had been left open.

It is believed that if they had been closed, as recommended by James Braidwood the Superintendent of the LFEE, the fire may have burnt out, avoiding disaster.

It has been suggested that the fire was so fierce because the firefighters couldn’t get a supply of water for nearly an hour.

This was made even more difficult as the Thames was at low tide.

Whilst the firefighters were tackling the blaze Braidwood noticed how tired they were getting and ordered that every firefighter receive a ‘nip’ of brandy.

While he was assisting one of his firefighters the front section of a warehouse collapsed on top of him, killing him instantly.
Posted by LONDON FIRE JOURNAL at 9/10/2012