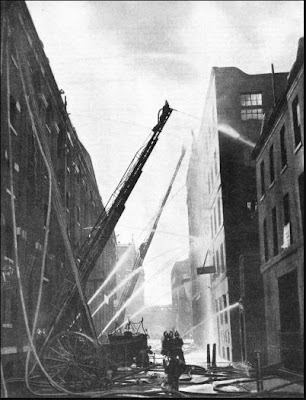 "POWERFUL JETS OF WATER discharged from many hoses were played on a big fire in an oils and colours warehouse at Southwark, London, from extended ladders and other vantage points. Often there is no building opposite from which water can be directed into a blaze, and then the use of extended ladders is all-important." 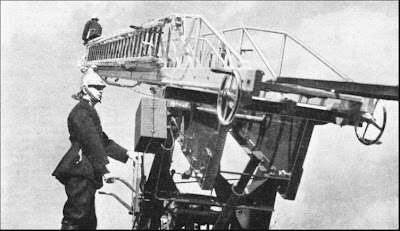 "THE POWERFUL MOTOR EXTENDING LADDER used by the Wimbledon (London) Fire Brigade is made entirely of steel, and extends to a height of 70 feet. The ladder is fixed to a turntable mounted on a chassis and operated by power from the motor. Hand levers control the gears for raising, extending, lowering and revolving the ladder."

London Fire Brigade has swooped to close a number of commercial buildings being used as living accommodation after uncovering some of the worst fire risks safety officers have ever seen.

Fire safety inspectors in Wembley have issued six “prohibition notices” on separate buildings being used as living accommodation on an industrial estate in the Alperton area. So far approximately 150 people have been found living in six premises.

The Brigade was alerted to the problem following a fire in an office block on Mount Pleasant at the end of October where firefighters rescued six people.

A subsequent inspection of the building revealed seventeen rooms with over 50 people living in them. Fire safety officers found virtually no fire safety features inside, such as fire protection between different floors, and extremely limited means of escape.

Inspectors say that a more fire serious fire could easily have ripped through the entire building and residents would have struggled to escape.

Investigations into who owned the property led officers to another building on nearby Beresford Avenue.

When they visited the offices, above a garage, on 9 November, they found similar potentially lethal conditions providing housing for 21 people, including three children.

The Brigade was then alerted to four more properties in the area housing a total of around 80 people.
Posted by LONDON FIRE JOURNAL at 12/01/2011 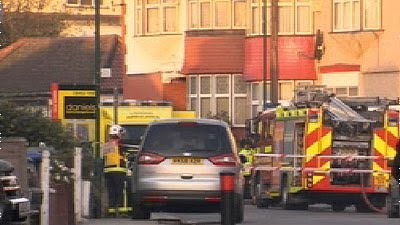 On Sept. 24, 2011, six members of the Kua family died in a house fire in Neasden, northwest London.

The fire apparently started in a freezer.

Glen Gorman, a London Fire Brigade station manager, said: "Firefighters were faced with very intense heat and smoke. It was a very difficult situation to deal with.

The blaze was London's deadlist house fire in more than a decade, the BBC said.

In the aftermath, the London Fire Brigade launched "a fire safety blitz" to warn of household hazards.

In 2009, a fire at the Lakanal House apartment block in south London also claimed six lives in 2009. 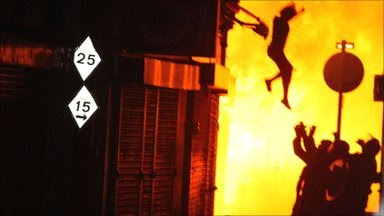 In early August 2011, the London Fire Brigade contended with rioting that started in Tottenham and spread across the city.

"Firefighters are either fighting or trying to get to a number of fires across the capital," the fire brigade said Aug. 8. "Fires involve commercial and residential buildings, cars and rubbish bins."

Violence was reported in Hackney, Lewisham, Peckham, Croydon, Brixton, Enfield Town, Walthamstow, Newham and Southwark in the aftermath of a police shooting.

Fire crews "were threatened as they tried to put out fires," the Press Association reported.

Rioters damaged fire engines from Brixton, West Norwood and Edmonton, according to the fire brigade.

Prime Minister David Cameron pledged to restore order and recalled Parliament in response to "sickening scenes" in London and other cities, the BBC said.

"As when Margaret Thatcher imposed such policies during her recessions this creates the threat of people losing control, acting in completely unacceptable ways that threaten everyone, and culminating in events of the type we saw in Tottenham."

Livingstone was quoted by the Socialist newspaper, The Morning Star. 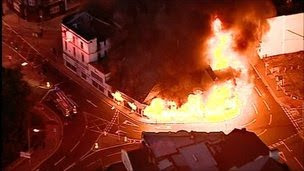 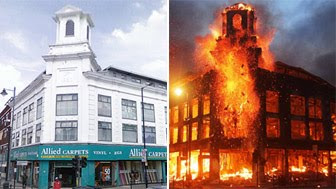 A London furniture store that stood for more than 100 years was destroyed in the August 2011 riots, according to the Daily Mirror.

Croydon family business Reeves - which stood on Reeves Corner, named for the shop - was torched as the violence spread.

Owner Trevor Reeves told Sky News: "Words fail me. It's just gone, it's five generations. My father is distraught at the moment. It's just mindless thuggery."
Posted by LONDON FIRE JOURNAL at 8/08/2011 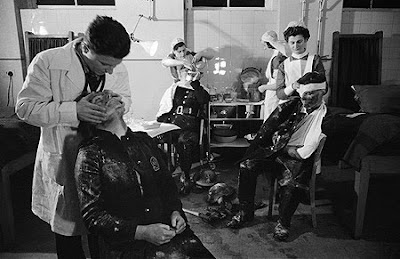 Photo from archives of Daily Mirror showing London firefighters being treated at Westminster Hospital during the Blitz. The photo is dated March 1, 1941. Members of the fire service suffered eye injuries caused by embers and debris.
Posted by LONDON FIRE JOURNAL at 2/24/2011 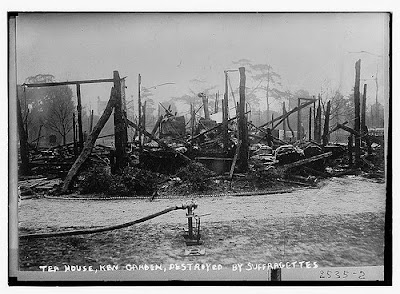 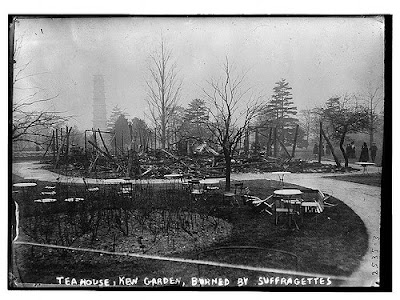 In 1913, the Tea House at Kew Gardens in London was set alight by suffragettes Olive Wharry and Lilian Lenton. The suffragettes were responsible for a series of blazes across London meant to protest government policy.
Posted by LONDON FIRE JOURNAL at 2/11/2011 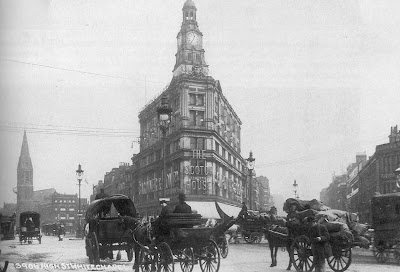 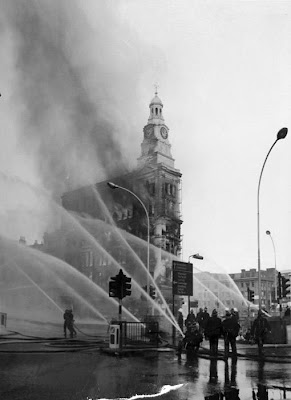 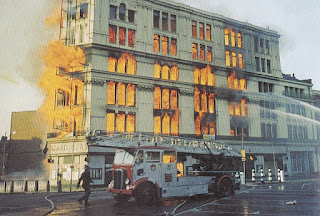 DEATH OF LONDON LANDMARK: Clothing store Gardiner gave its name to the junction Gardiner's Corner, which brought together the main thoroughfares of East London. In 1972, fire gutted the century-old building and caused the clock tower to collapse. The business had closed the year before the fire.
Posted by LONDON FIRE JOURNAL at 2/10/2011 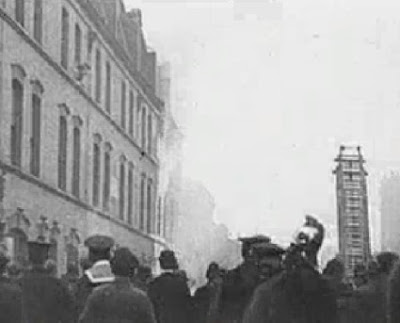 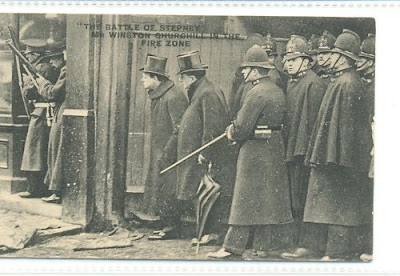 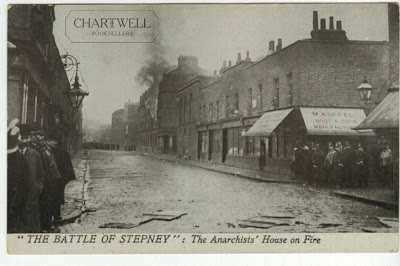 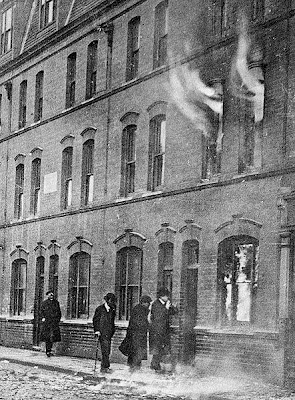 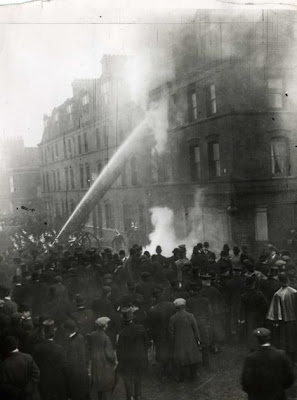 Scenes of the "Battle of Stepney" on Sidney Street, East London, on Jan. 2, 1911. The gunfight and fire led to the death of two "anarchists" suspected in the Houndsditch Murders of three police officers. The siege also claimed the life of a London fireman - Superintendent Charles Pearson - who sustained injuries when a wall collapsed. He died several months later. The incident sparked a political row over the involvement of then-Home Secretary Winston Churchill.
Posted by LONDON FIRE JOURNAL at 2/10/2011