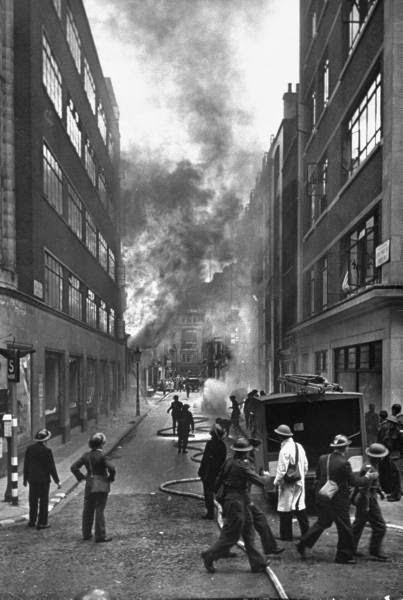 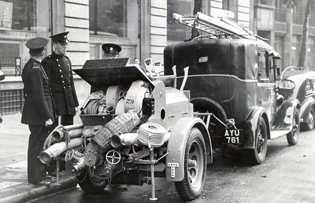 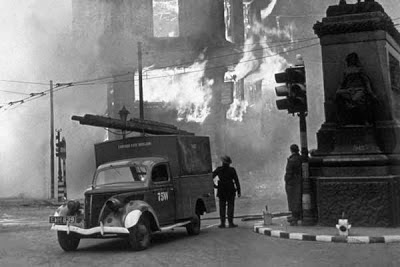 
Professional firemen grumbled. The public sneered. In the end, the U.K.'s auxiliary fire crews performed heroically when German bombs rained from the sky in 1940 and 1941.

Writing on the 70th anniversary of the Blitz in the Sept. 7, 2010 edition of The Guardian newspaper, Francis Beckett - author of the book "Firefighters and The Blitz" - said the fire service was "about the only thing the government had got right."

In March 1938, the government created the Auxiliary Fire Service to augment the U.K.'s regular fire brigades.


In London alone, the AFS recruited 28,000 auxiliary full- and part-time firefighters to supplement the professional fire crews , and they performed with great courage and determination as German bombs fell.
However, "the AFS might easily have failed," Beckett wrote.
"Professional firefighters resented it, while AFS people grumbled that they were paid less and their conditions of service were inferior."
Members of the public were critical of AFS members for skirting military duty.
In the  end, according to Beckett:
"The situation was saved by an alliance between London Fire Brigade chief Major Frank Jackson and the leftwing leader of the Fire Brigades Union, John Horner, who collaborated in persuading regular firefighters to accept the AFS as equal."

The following BBC article surveys the fire service at war:


By September 1939 the AFS had over 200,000 members, some of whom were equipped with pumps pulled by cars, or London taxis painted grey, as equipment was in such short supply.

The Blitz on London and other large cities greatly enhanced the reputation of fire-fighters - Winston Churchill dubbed them the 'heroes with grimy faces'. Firemen dealt with hundreds of fires raging out of control as bombs continued to fall and buildings collapsed around them. The blazing fires provided a marker for more German raids, creating yet more destruction. In the first three weeks of the Blitz the London firefighters fought 10,000 fires.

Regular paid fire-fighters worked 48 hours on, 24 hours off, although during the Blitz, they sometimes worked for 40 hours or more. They were joined, mainly at night, by part-time members of the AFS. For many of these volunteers, it was their first experience of fire-fighting.

During the Blitz, the division of responsibility among different fire brigades caused chaos when one fire brigade called for help from others. As a result, in May 1941 the Home Secretary announced that the regional fire brigades and the AFS would be merged, and their name changed to the National Fire Service. This change was effected in August 1941. Some of the most senior jobs went to men from the Auxiliary Fire Service. The creation of the new service ensured that there could be standardisation of organisation, equipment and drills throughout the different fire brigades.

Women were recruited into the fire service from 1938 onwards. In March 1943 there were 32,200 women serving full-time, and 54,600 part-time, with the National Fire Service. While women did not tackle major fires, they provided important back-up to their male colleagues. They staffed communication centres, crewed mobile canteen vans and acted as drivers and dispatch riders. During bombing raids the latter were often the only means of communication between fire crews and their control rooms.

From December 1940, after the 'Second Great Fire of London' showed the disastrous consequences of leaving small commercial and industrial premises unattended at night, compulsory fire-watching patrols were introduced. Men between 16 and 60 were required to put in 48 hours each month. In September 1942, women were also obliged to take their turn.

During the war, more than 900 firemen and women lost their lives.