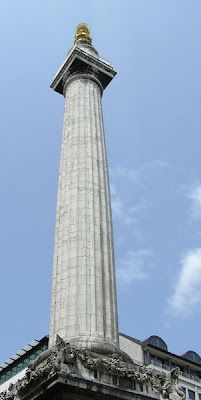 The Monument to the Great Fire of London - more commonly known as The Monument - towers over the City of London to commemorate the 1666 conflagration.

The Roman doric column was constructed between 1671 and 1677 - by order of the first Rebuilding Act of 1669 - to ``preserve the memory of this dreadful visitation.''

The Monument was built near the site of where the first started - Thomas Farryner's bakery on Pudding Lane - and stands 202 feet - or about 62 meters.

The Great Fire burned from Sept. 2 to Sept. 5, 1666 and gutted the medieval City of London inside the old Roman City Wall, according to Wikipedia.

Another monument, the Golden Boy of Pye Corner, marks the point near Smithfield where the flames stopped.
Posted by LONDON FIRE JOURNAL at 2/25/2009