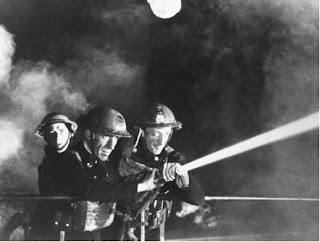 A tip of the helmet to Canadian firefighter Huw Jones for alerting us to the movie "I Was a Fireman" - about the 1940-41 blitz.

This realistic 1942 film - originally titled "Fires Were Started" - focuses on a day in the life of Fire Station 14-Y of the London Auxiliary Fire Service.

The cast is composed of blitz firemen and firewomen, though none received credits.

On the hose line in photo are "Jacko" (left) and "The Colonel" (right). Supervising is Sub-Officer Dyke. (These are the character names.)

The film was directed by Humphrey Jennings for the Crown Film Unit, a propaganda office in the Ministry of Information.

After the war, Jennings was described as "the only real poet that British cinema has yet produced."

He died in 1950 while scouting locations  for a documentary.

My uncle Edward Carrick was an art director and production designer in films from the 20s to the 60s, and during the Second World War he worked for the Crown Film Unit, the Ministry of Information's wartime documentary (ie propaganda) film arm. He was art director on Target for Tonight (1941) about the RAF's bombing missions; Close Quarters (1943) for which he filmed on a working submarine as well as built a full-size model of it; Western Approaches (1944) about the Merchant Navy; and Fires Were Started (1943) Humphrey Jennings' masterpiece of dramatised documentary (also known as I Was A Fireman).

Fires Were Started is a record of a day and night in the Fire Service during the Blitz. It is set in Trinidad Street and Alderman's Wharf in Limehouse — then a working East End community of wharves and warehouses, not the miles of characterless 1980s flats it is today. Carrick recounted working all day during the Blitz, and going out with a cameraman at night to film anything that could be useful. The East End was an important target for the Luftwaffe, and one night he chanced to see the old Tate and Lyle factory at Silvertown explode into flames. They had an old hand-crank camera with them, and the cameraman got so excited that he inadvertently sped up the winding. The Tate and Lyle explosion is the same big conflagration seen in Fires Were Started. The damage at Silvertown that night was extensive, destroying other factories and wharves as well, which were still on fire the next morning.

Carrick needed to stage a fire at night for the action of the film, but it had to be carefully controlled — the authorities were none too thrilled about the film unit starting another fire when there already so many! A lot of effort went into the filming of the burning building (an already-bombed warehouse). At one point in the middle of it all, Carrick flicked off his protective leather jacket what he thought was ash, only to realise it was molten lead dripping onto him from the roof. He survived, the film was a dramatic and moving success, and his daughter-in-law wore the jacket into the 1960s.
Posted by LONDON FIRE JOURNAL at 5/27/2012