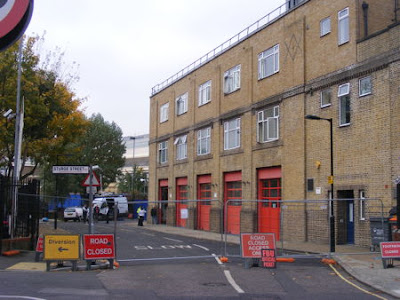 "The London Fire Brigade's Southwark training centre is the nerve centre for the private emergency fire service protecting the capital during the latest strike by members of the Fire Brigades' Union," according to the London SE1 community web site. Security has been increased at the training facility.

London's firefighters held a second walkout on Nov. 1, 2010, and the industrial action resulted in injuries to two striking firefighters and a union official.

The dispute is over the fire authority's efforts to force a new contract on members of the Fire Brigades Union. Firefighters who decline to sign the new contract, which would impose a new shift pattern, face dismissal.

Minimal protection was again provided by 162 temporary firefighters employed by AssetCo. during the 8-hour work stoppage. The contract crews staffed 27 engines after undergoing a 12-day course on basic tactics.

There are no special units - i.e., turntable ladders or rescues - "on the run" during a walkout.

The London Fire Brigade normally fields about 170 engines and other appliances, and regular firefighters undergo a 16-week basic training course at Southwark followed by three years of probation.

[London firefighters had also planned to strike between Nov. 5 and Nov. 7 to coincide with the Bonfire Night holiday and the Hindu festival of Diwali - both of which feature incendiaries - but that action was shelved.]

During the national fire strike in 2002, the military deployed about 90 "Green Goddess" engines to protect Greater London alone, according to BBC statistics. LINK

The BBC reported: "Private contractors responded to 20 callouts, including eight fires, between 1000 and 1800 GMT on Monday."

A London Fire Brigade press release said: "Lessons learned from the first strike have enabled deployment and management of the emergency fire crews to be achieved more efficiently than last time."

However, "the service provided by the contractor is not intended to replicate or replace the Brigade’s operational cover arrangements and a reduced level of firefighting services will be provided," according to the fire brigade's web site.

Injuries on the picket lines marred the day.

The Daily Mail reported: "A striking fireman was hospitalised today after he was hit by a car that was apparently breaking a picket line outside a fire station." The car was following a fire engine, staffed by a contract crew, into the Croydon Fire Station, the Daily Mail said.

News reports identified the driver of the car as a fire brigade manager.

In another incident, "A stand-in firefighter was driving a fire engine back into the brigade's Southwark training centre when it collided with Fire Brigades Union official Ian Leahair, sending him crashing to the ground," according to the Evening Standard.

At Dagenham station, a striker suffered a sprained hand after he was struck by a fire engine, according to a Fire Brigades Union press release.

The general secretary of the Fire Brigades Union, Matt Wrack, said: "It looks as though the private company hired to do our work has instructed its drivers to drive fast through picket lines. We ended the day in the extraordinary situation where the police had to protect striking firefighters from recklessly speeding vehicles, which were driven by those paid to break the strike."

According to the Evening Standard:

"AssetCo, based in South Ruislip, draws many of its recruits from the Uxbridge-based Reliance Security Group, which provides security guards for shopping centres and to transport prisoners to and from courts. The temporary crews were sent on a course in Lincolnshire, where they were taught basic techniques in firefighting and dealing with road accidents."

The temporary firefighters are paid about 20 pounds per hour by AssetCo., which also has a contract to maintain the fire brigade's fleet of vehicles, according to the Evening Standard.

A contract firefighter quoted by the Daily Express said: “There’s the potential for somebody to lose their life. I don’t understand why we couldn’t have had more training."