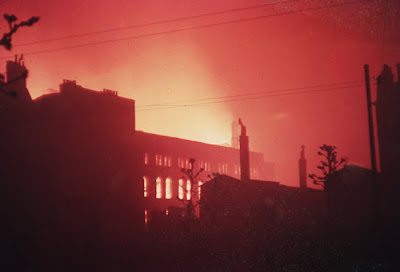 September marks the 70th anniversary of The Blitz.

Writing in the Sept. 7, 2010 edition of The Guardian newspaper, Francis Beckett - author of the book "Firefighters and The Blitz" - said the fire service was "about the only thing the government had got right" in the buildup to the war.

In March 1938, the government created the Auxiliary Fire Service.

In London alone, the AFS recruited 28,000 auxiliary full- and part-time firefighters to supplement the professional fire crews , and they performed with great courage and determination as German bombs fell.

However, "the AFS might easily have failed," Beckett wrote.

"Professional firefighters resented it, while AFS people grumbled that they were paid less and their conditions of service were inferior. The situation was saved by an alliance between London Fire Brigade chief Major Frank Jackson and the leftwing leader of the Fire Brigades Union, John Horner, who collaborated in persuading regular firefighters to accept the AFS as equals."
Posted by LONDON FIRE JOURNAL at 9/08/2010