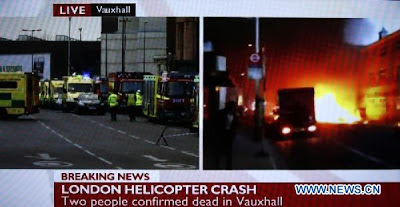 It happened in the London fog.

On Jan. 16, 2013, a helicopter clipped a construction crane over central London and plunged to the ground during the morning rush hour .

Crane operator Nicki Biagioni avoided what newspapers called an almost certain death because he was late for work.

"The Met Office said at the time of the crash the area was prone to widespread low cloud, poor visibility and patches of freezing fog," according to the BBC.

The police have confirmed that two people died at the scene. Fire crews rescued a man from a burning car. London Ambulance Service took six people to hospital and treated seven people at the scene.

Two office buildings were damaged by debris from the helicopter. Five cars and two motorbikes were also damaged in the crash.

Fifty seven firefighters and officers also attended a crane which was left in a precarious position at Saint Georges Wharf, SW8 as a result of the helicopter crash. Around 600 construction workers self evacuated and around 40 homes were evacuated by the police.

Specialist Urban Search and Rescue crews worked with specialist contractors to assess the damage and make the area safe. The incident has now been handed over to the police and an aviation accident investigation team.

The Brigade's fire boat has also carried out a precautionary search of the river.

The Brigade was called at 0800. The fire was out within 20 minutes and the helicopter crash incident was over for the Brigade at 1137.