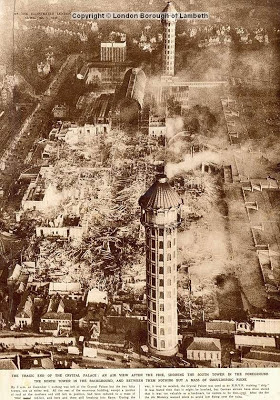 Sir Winston Churchill called it the ``end of an era.'' A spectacular fire destroyed London's famed Crystal Palace - considered the world's first modern theme park - on the night of Nov. 30, 1936.


The iron-and-glass behemoth was built in 1854 in Upper Norwood as successor to an exhibition hall erected in Hyde Park. It consisted of 900,000 square feet of glass.

News of the disaster sped around the world.

The next morning, The New York Times reported on its front page:

LONDON, Nov. 30 - Engulfed in a roaring sheet of flames, which towered so high into the night sky that it could be seen almost from the English Channel, the world-famous Crystal Palace, architectural pride of the Victorian era, crashed to the earth tonight a raging inferno of twisted girders and molten glass.

A man named Henry Buckland and his daughter Crystal, named for the London palace, were walking their dog when they noticed a small fire and sounded the alarm.

The flames spread swiftly, engulfing the structure - and prompting London Fire Brigade commanders to summon a total of 88 fire engines and 438 firefighters, including some from neighboring cities, according to the BBC.

``Within hours, fire consumed all that had stood for a mighty empire and boundless imagination,'' according to Wikipedia, an online encyclopedia.

The New York Times said the battle was lost from the start:

Within a half hour, the great arcade of glass, towering 175 feet, collapsed, sending up showers of sparks and blazing embers. Then as if drawn by a flue the flames swept the whole length of the nave.

The first fire alarm must have been turned in soon after the blaze was discovered, for neighboring fire brigades arrived before the flames had begun to reach their fury. But efforts to check the spread were futile, as were those of London's most powerful fire-fighting forces, which were quickly notified and sped over all bridges leading to the south bank of the Thames.

Within three hours after the outbreak, the celebrated show place, known to millions in three generations, lay a smoldering, charred ruins.Several firefighters suffered injuries fighting the fire, the cause of which was most likely accidental.

Thousands gathered for a close view of the blaze.

More than 700 police officers tried to control the crowd.

While police worked desperately to clear residents of dwellings within a radius of a mile, more thousands gathered on rooftops and other points of vantage. Members of Parliament watched from the windows of committee rooms and from terraces.

A member of the royal family, the Duke of Kent, donned firefighter turnout gear to visit the fire lines, according to Neil Wallington's book ``Great Fires of London.'' (British firefighters call their turnout gear their ``kit.'')

During World War II, the 20-acre site was used as a dump for rubble from the German air bombardments, according to the London Development Agency.