The 1987 King's Cross fire burned for several hours, killing 31 people - including Soho's Station Officer Colin Townsley (at left) who died trying to rescue a woman from the ticket hall 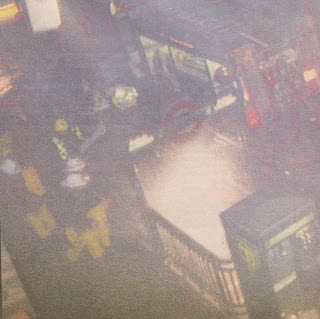 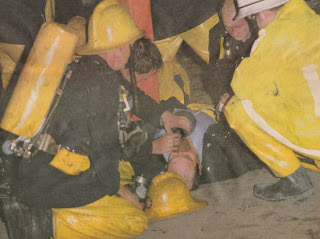 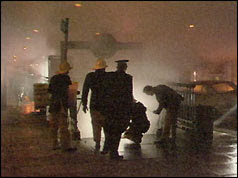 On Nov. 18, 1987, a flash fire engulfed an old wooden escalator at the King's Cross underground station. Thirty one people perished in that disaster including a firefighter - Colin Townsley, station officer from the Soho Fire Station in central London. Two other firefighters were trapped on the station platform - at the bottom of the escalator - but survived.

``The thick hanging smell of the fire lingered in the tube station passageways for months afterwards,'' commuter Andrew Pryde told the BBC.

A discarded match apparently ignited grease and rubbish in a machine room beneath escalator serving the Picadilly Line, even though smoking was banned on the London Underground after a fire at the Oxford Circus station a few years earlier.

``I remember the machine rooms under the escalators throughout the Underground system before the fire used to be disgusting places covered in oil and grime,'' electrician Karl Hoskin told the BBC. ``But within a very short space of time after the fire they became so clean you could have almost eaten your dinner from the floor!''

Townsley and his crew from Soho were first due at King's Cross that night followed by the crew at the Clerkenwell station. Firefighters from the nearby Euston fire station were at another alarm at University College Hospital. Soon thereafter, the Soho firefighters radioed for assistance - “Make Pumps Four Persons Reported” and Euston responded.

Paul Grimwood, who was a fire investigator with the London Fire Brigade at the time, provided the following report to the web site Fire Tactics:

Kings Cross underground station is one of the busiest on London's 'tube' railway network serving over 100,000 passengers during peak hours. At approximately 7.32 pm on the evening of the fire, smoke was seen coming from one of the wooden escalators that was transporting passengers up from the platform levels to the ticketing hall.

The London Fire Brigade dispatched 4 engines and an aerial ladder as the call was received at 7.36 pm and the first of these arrived on scene at 7.42pm. A team of firefighters went down from street level into the ticketing hall from where they could see a fire burning about 20 feet down the escalator shaft with four feet high flames emerging from the escalator stairs. At this stage there were still passengers exiting from the platforms below in an orderly manner.

As firefighters returned to street level to collect hose and breathing apparatus three officers remained in the ticketing hall to supervise the evacuation of passengers. Whilst two of them began a descent down towards the platforms to prevent further use of this escalator as an exit route, the senior officer - Station Officer Colin Townsley - remained in the ticketing hall at the top of the escalator shaft.
Flames explode
More from Grimwood:
At 7.45pm the fire suddenly erupted up into the ticketing hall and created severe conditions likened to that of a flashover. At street level thick volumes of black smoke began to emerge from the station entrances and a large number of screaming passengers exited into the street. The fire burned for several hours killing 31 people including Soho's Station Officer Colin Townsley who died trying to rescue a woman from the blazing ticketing hall as the fire suddenly erupted.

Firefighters attempting to re-enter the ticketing hall to fight the fire likened the conditions as similar to climbing down into a volcano.

Various theories were put forward as to what caused the ' flashover like' conditions as the fire suddenly erupted into the ticketing hall. In terms of scientific definition the event did not conform to the universal acceptance of what constitutes a 'flashover'. Consideration was given to the possibilty of an ignition of fire gases that may have accumulated within the ticketing hall where such an event would be more closely accepted in definition to that of a 'backdraft'.

Further thought was directed at the likelihood of the escalator fire being pushed upwards in the shaft by a 'piston effect' as trains arriving at platforms forced a major airflow out of the tunnels and up into the ticketing hall. However, mathematical modeling and computer simulations promoted a new theory of rapid fire development within inclined shafts with combustible surfaces termed trench effect.

It was established that once the trench effect became established, the 'piston effect' from trains would not have played an important role in the rapid spread of the fire up the escalator and into the ticketing hall. This trench effect was seen to cause hot gases in the buoyant plume to lay along the escalator surface and create a rapid airflow which caused these gases to curl over and over towards the next steps above. The airflows in the trench increased in proportion to the size of the fire, eventually creating a flamethrower type effect up and into the ticketing hall.

However, it is certain that a large quantity of unburned combustion products (pyrolyzates) existed in the smoke and fire gases forming at ceiling level in the booking hall at the head of the escalator as the fire reached this stage of rapid fire progress. It is also apparent, from firefighters accounts, that the piston effect did play a major part at various stages of the fire's development in creating a more intense fire as trains passed through the station tunnels some levels below the escalator itself.

The cause of the fire was discovered by London Fire Brigade investigators to have resulted from the most likely discardment of a lighted match (smoker's material) by a passenger on exit from the system and strong evidence existed that demonstrated several smaller fires of this type had occurred in the past on this escalator but never progressed beyond a small self extinguishing fire that probably went unnoticed. Subsequent tests confirmed the likelihood of such a fire being able to develop beyond a stage of self extinguishment when located in the grease track that existed under the escalator. There had also been several small fires on other underground stations in London that involved wooden escalators.

Although the evidence was heavily weighted towards the careless discardment of a lighted smoker's match as a cause of the fire there had been reports of an earlier incident in the evening on an adjacent escalator in a nearby shaft that raised the question as to whether the Kings Cross fire could have been caused maliciously. There had been several accounts by witnesses who described a small fire existing at the base of an escalator in the Victoria line shaft just minutes before the reported fire in the Piccadilly line shaft that progressed into a major conflagration.

This smaller fire involved an item of burning paper that appeared to have been rolled up and thrown down the shaft from or near the top of the escalator.

The fire led to new safety regulations, according to the online encyclopedia Wikipedia:

The Fennell Investigation into the fire prompted the introduction of the Fire Precautions (Sub-surface Railway Stations) Regulations 1989 (usually referred to as the Section 12 Regulations because they were introduced under section 12 of the 1971 Fire Precautions Act). These led to: the replacement of all wooden escalators on the Underground; the mandatory installation of automatic sprinklers and heat detectors in escalators; mandatory fire safety training for all station staff twice a year; and improvements in emergency services liaison.

Sadly, tragedy visited the underground station again in the terrorist attack on London on July 7, 2005. A bomb exploded on a train in the tunnel between King's Cross and Russell Square. The London Fire Brigade rescued victims trapped below.