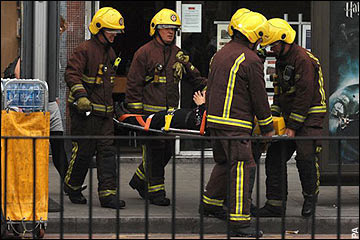 Photo: Daily Telegraph
On July 5, 2007, hundreds of London Underground commuters were trapped on the Central Line for two hours after a train struck "an obstacle" between Mile End and Bethnal Green, according to The Daily Telegraph. "Emergency services treated 20 people for light injuries, including five who were brought to hospital mainly as a result of suffering breathing problems because of panic attacks," the Telegraph reported.
Posted by LONDON FIRE JOURNAL at 3/17/2010